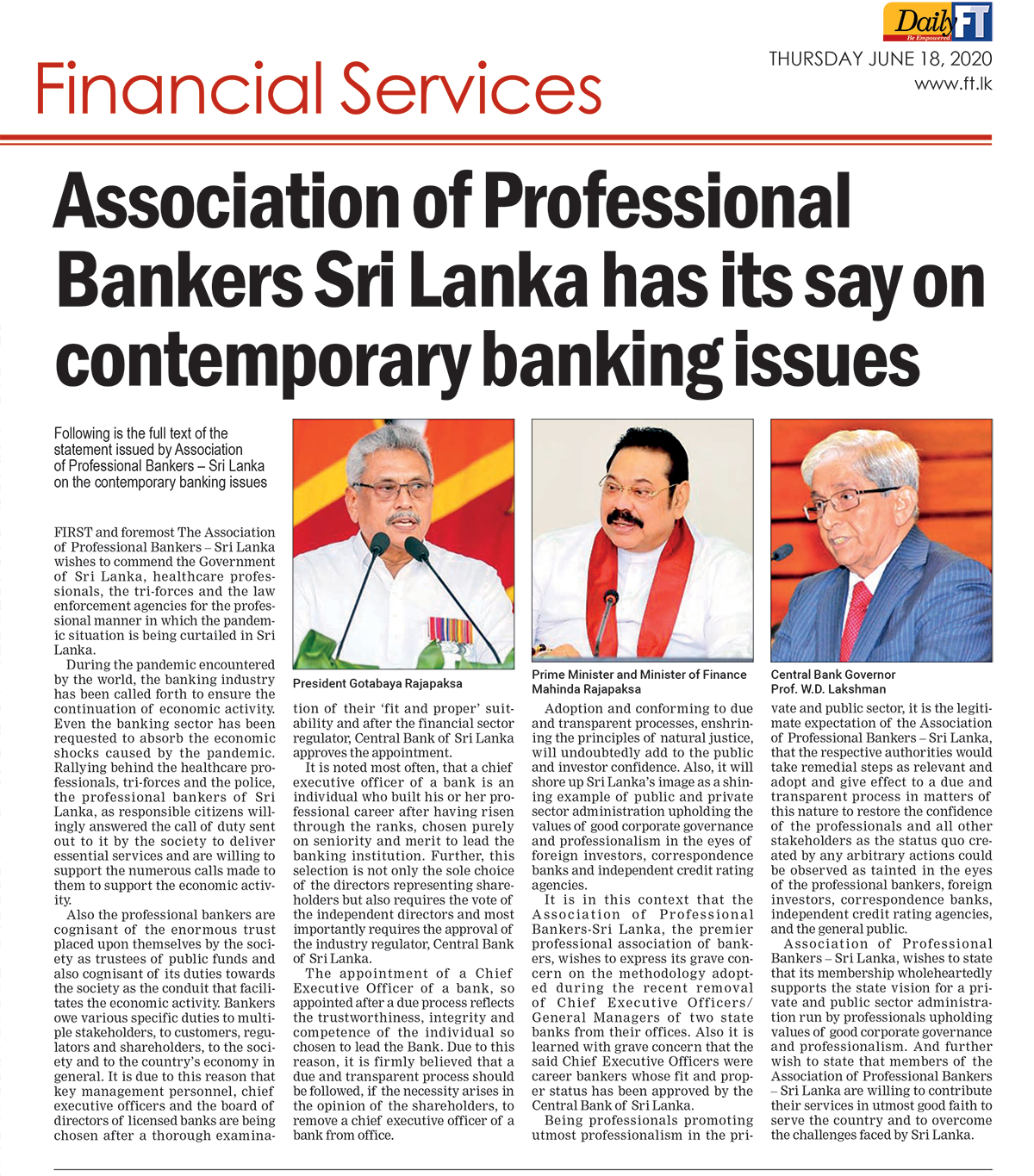 First and foremost The Association of Professional Bankers-Sri Lanka wishes to commend the Government of Sri Lanka, health care professionals, the tri-forces and the law enforcement agencies for the professional manner in which the pandemic situation is being curtailed in Sri Lanka.

During the pandemic encountered by the world, the banking industry has been called forth to ensure the continuation of economic activity. Even the banking sector has been requested to absorb the economic shocks caused by the pandemic. Rallying behind the health care professionals, tri-forces and the police, the professional bankers of Sri Lanka, as responsible citizens willingly answered the call of duty sent out to it by the society to deliver essential services and are willing to support the numerous calls made to them to support the economic activity.

Also the professional bankers are cognizant of the enormous trust placed upon themselves by the society as trustees of public funds and also cognizant of its duties towards the society as the conduit that facilitates the economic activity. Bankers owe various specific duties to multiple stakeholders, to vit customers, regulators and shareholders, to the society and to the country’s economy in general. It is due to this reason that key management personnel, chief executive officers and the board of directors of licensed banks are being chosen after a thorough examination of their “fit and proper” suitability and after the financial sector regulator, Central Bank of Sri Lanka approves the appointment.

It is noted most often, that a chief executive officer of a bank is an individual who built his or her professional career after having risen through the ranks, chosen purely on seniority and merit to lead the banking institution. Further, this selection is not only the sole choice of the directors representing shareholders but also requires the vote of the independent directors and most importantly requires the approval of the industry regulator, Central Bank of Sri Lanka.

The appointment of a Chief Executive Officer of a bank, so appointed after a due process reflects the trustworthiness, integrity and competence of the individual so chosen to lead the Bank. Due to this reason, it is firmly believed that a due and transparent process should be followed, if the necessity arises in the opinion of the shareholders, to remove a chief executive officer of a bank from office.

Adoption and conforming to due and transparent processes, enshrining the principles of natural justice, will undoubtedly add to the public and investor confidence. Also, it will shore up Sri Lanka’s image as a shining example of public and private sector administration upholding the values of good corporate governance and professionalism in the eyes of foreign investors, correspondence banks and independent credit rating agencies.

It is in this context that the Association of Professional Bankers-Sri Lanka, the premier professional association of bankers, wishes to express its grave concern on the methodology adopted during the recent removal of Chief Executive Officers/General Managers of two state banks from their offices. Also, it is learned with grave concern that the said Chief Executive Officers were career bankers whose fit and proper status has been approved by the Central Bank of Sri Lanka.

Being professionals promoting utmost professionalism in the private and public sector, it is the legitimate expectation of the Association of Professional Bankers-Sri Lanka, that the respective authorities would take remedial steps as relevant and adopt and give effect to a due and transparent process in matters of this nature to restore the confidence of the professionals and all other stakeholders as the status quo created by any arbitrary actions could be observed as tainted in the eyes of the professional bankers, foreign investors, correspondence banks, independent credit rating agencies, and the general public.

Association of Professional Bankers-Sri Lanka, wishes to state that its membership wholeheartedly supports the state vision for a private and public sector administration run by professionals upholding values of good corporate governance and professionalism. And further wish to state that members of the Association of Professional Bankers-Sri Lanka are willing to contribute their services in utmost good faith to serve the country and to overcome the challenges faced by Sri Lanka.